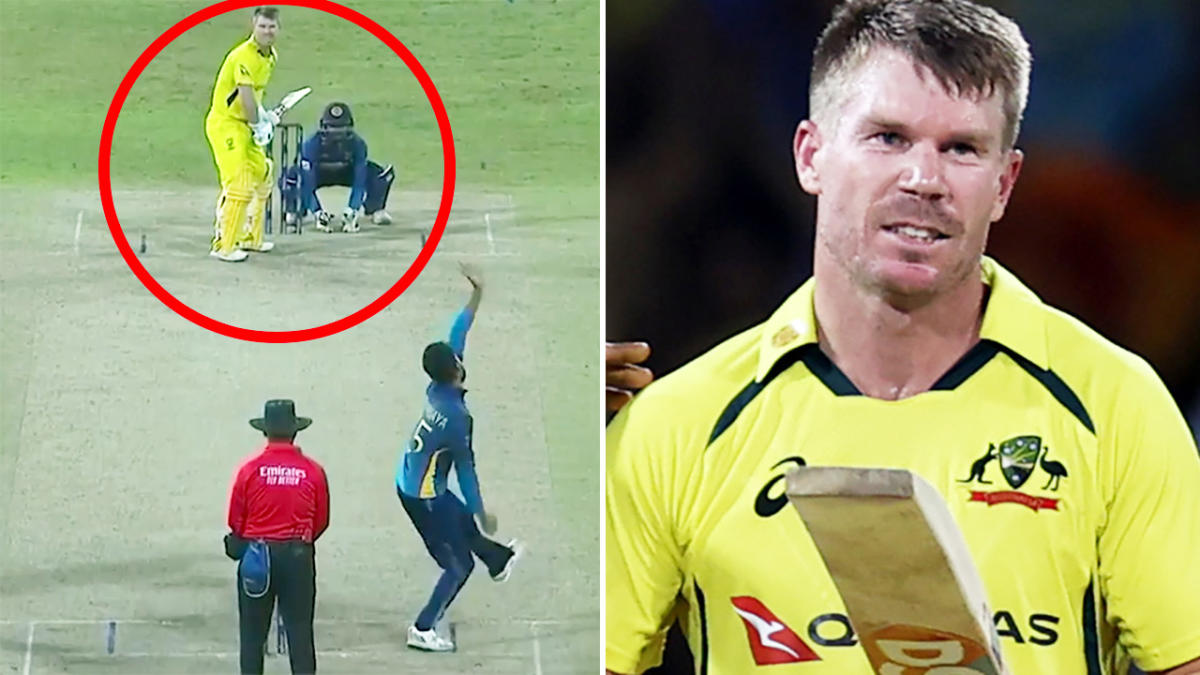 David Warner and Aaron Finch have combined to produce some unwanted cricket history as Australia lost the fourth ODI and the series against Sri Lanka.

Chasing 259 for victory on Tuesday, Warner played a lone hand as Australia capitulated from 4-189 in the 36th over to be all out for 254.

In winning the fourth ODI, Sri Lanka are now 3-1 up in the five-match series.

Warner had looked in complete control after Finch (0), Mitch Marsh (26), Marnus Labuschagne (14) and Alex Carey (19) all came and went cheaply.

The opener was cagey in the early overs, before throwing his hands at mystery spinner Maheesh Theekshana and taking him on.

Warner hit 12 boundaries in his knock, going hard through the covers and driving superbly.

And when he reached 99 he looked almost certain to end the longest century drought of his international career, which now sits at 48 innings across all formats.

However he was undone by a beautiful piece of bowling from Dhananjaya de Silva, who drew Warner out of his crease and beat his outside edge to have him stumped.

It was the sixth time Warner has been dismissed in the 90s in one-day cricket, and also resulted in a never-before-seen slice of history.

It marked the first time since ODI cricket began in 1971 that a team’s openers have been dismissed for 0 and 99 in the same match, and just the second time someone has been stumped on 99 in the 50-over format.

Fans were left gutted for Warner after he fell agonizingly short of three figures.

The margin of defeat could have been far worse for Australia if not for Pat Cummins’ 35 and Matthew Kuhnemann scoring 14 from the final over off Dasun Shanaka before being caught in the ring on the final ball.

But it couldn’t paper on Australia’s uphill battle against spin ahead of a two-Test series.

Seven wickets fell to the slower bowlers, as Sri Lanka played five tweakers and sent down 43 overs from them on a used wicket that spun well into the night.

With the Aussies seemingly in cruise control, the match then swung violently in Sri Lanka’s favor and gave them their first bilateral one-day series win over Australia at home since 1992.

With Warner at the non-striker’s end, Travis Head (27) was bowled by Dhananjaya, before Glenn Maxwell was trapped lbw by Theekshana the next over.

The collapse will no doubt have evoked memories of the 2016 Test tour for the locals, when Australia struggled to combat the spin in the 3-0 series loss.

“This is extreme spin; you don’t usually see these type of wickets,” Warner said.

“You only see them here. India is completely different. They don’t turn like that. They’re actually good wickets. And they turn later on day three or four (of Tests).

“So everyone has to prepare as well as they can. It’s about being busy.

“It’s about batting long periods of time. And unfortunately, in the subcontinent, one little mistake will cost you.”

The good news for Australia was that their two best players from 2016 are returning to fitness, with Mitchell Starc and Steve Smith both sighted in the nets after finger and quad injuries respectively.

Cummins also bowled nicely on Tuesday, taking 2-37 and unlucky not to have another wicket early when he hit Charith Asalanka’s leg stump with the left hander on one.

Click here to sign up to our newsletter for all the latest and breaking stories from Australia and around the world.