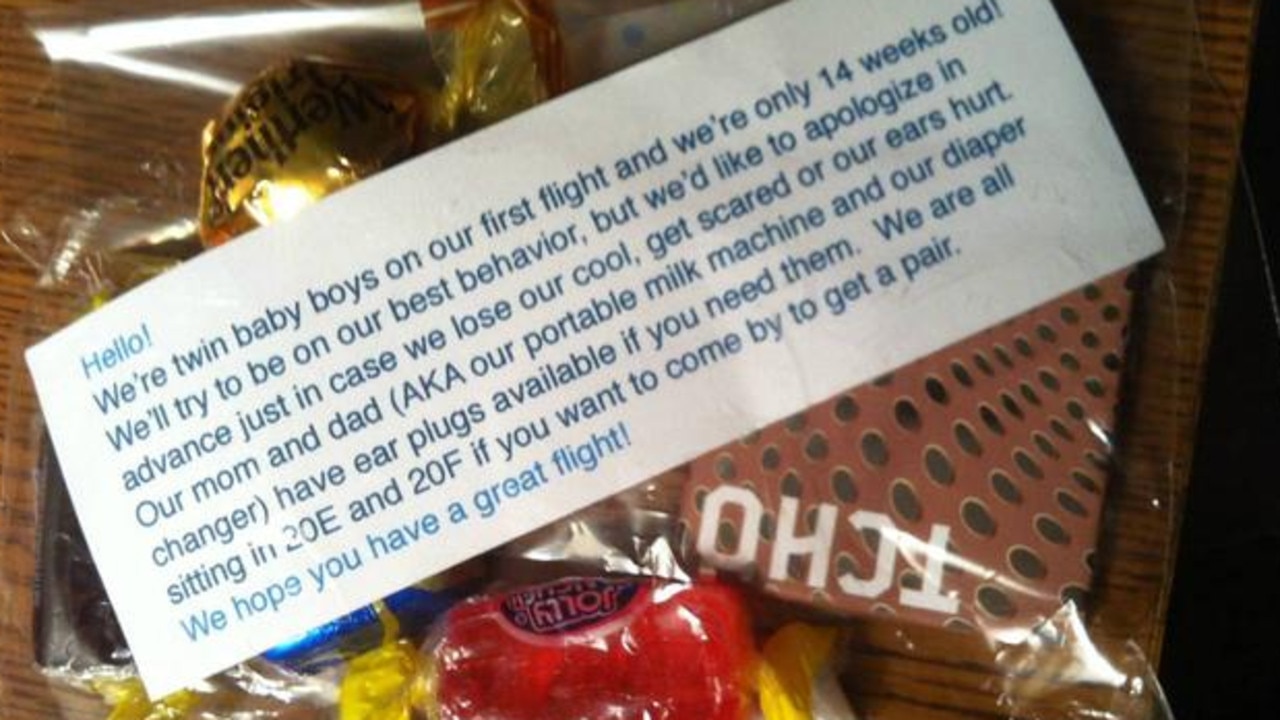 A travel trend has got out of control with parents of babies traveling on planes now expected to write an apologetic note, complete with treats, begging for forgiveness.

Since the global pandemic – and let’s be honest, maybe even before – plane travel has become something of a lawless place.

People are fighting, they’re farting. They’re taking off their shoes and putting their bare feet in people’s faces.

We could blame the cramped seating or the complete lack of personal space. But the point is – the general public no longer cares how they behave.

But there is one law, seemingly etched in stone somewhere, that you cannot, under any circumstances, bring a crying baby anywhere near a plane.

If you do, you should expect to write a deeply apologetic note, complete with treats, begging for forgiveness.

It began in 2012, when a family with three-month-old twins posted about their kind gesture on Reddit, where it quickly went viral.

But that poor family had no idea their act of consideration would set a precedent: apologise for your baby or get them off the aircraft.

Five years later, in 2017, Amal and George Clooney got in on the act, passing out actual headphones along with a note apologizing for their twins. Who on earth can compete?

As a result, this trend, of handing out a “just-in-case” apology for normal human behavior is now commonplace. First, you’ve got to choose the right lollipops. Throw in ear plugs. Maybe a voucher to KFC.

Then, you should carefully type up your note. Below is a template you can feel free to use.

“Dearest Passengers, most of whom are wearing masks over their mouths only,

It is with deep shame I must announce I have an actual, tiny human on board with me.

This human may, from time to time, experience fluctuations in air pressure, resulting in enormous pain in their middle ear.

As a result, they may scream. I am aware that though some of you enjoy nothing more than a peaceful flight in which you can chew loudly with your mouths open or yell your opinions on such topics as race and gender, my tiny human is disrupting your experience.

And I am willing to pay penance, in the form of lollies, candies, snacks etc for fellow passengers. If you need to yell at me, you can reach me at the back of the plane. I’m trying my best to soothe a crying infant who is wriggling in my arms but am still happy to take a knee while you berate me for my inconsiderate ways.

Those of you who cannot reach me are still welcome to shoot glances of disgust my way. Clucking tongues and rolled eyes will be gratefully accepted.”

Author Diksha Basu, who said she has been traveling with her kids since they were seven-weeks-old, isn’t having it, tweeting “I have only one controversial take and that is that parents of babies should not hand out silly little apology packages to fellow passengers on airplanes.”

She continued, “Imagine not only having to deal with a crying baby but also having to make small talk and jokes with the parents as they hand you a bag of terrible candy.”

For the record, the candy is not always terrible. But, her point, that “nobody is winning but we get to zip across the world in little metal tubes and we should be … in awe …” is solid. And if you can’t muster up awe every time you softly touch elbows with a complete stranger who refused to shower that morning, then consider this. If people are willing to subject passengers to their trashy, impromptu wedding, involving a lingering, open-mouthed kiss or their evangelical singing, then caregivers – already sleep-deprived and nervous about the flight – should be granted a bit of clemency.

This article originally appeared in Escape and was reproduced with permission